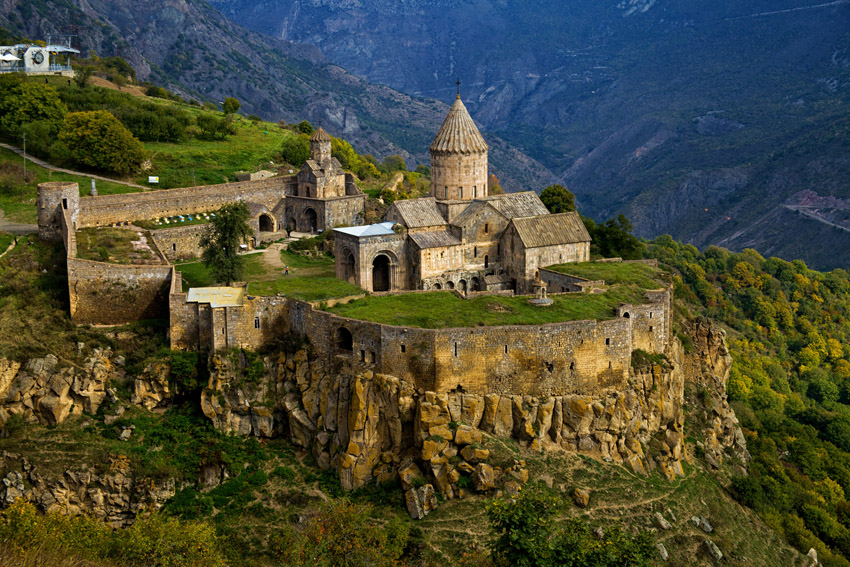 The jewel of medieval Armenian architecture, Tatev, was constructed in the 9 th – 13th centuries. The access to it is very complicated due to the terrain features. Nevertheless, the true lovers of unique ancient monuments do find ways to visit this masterpiece of medieval architecture.

Tatev Monastery is in the centre of the marz of Syunik near the village of the same name, on the right elevated bank of the river Vorotan. Before climbing this breathtaking height it is necessary to go down the 500-m canyon of the Vorotan, to linger on the natural Devilish Bridge (two riverbanks converge forming a “bridge”), near the warm mineral springs and then to go up the mountain road. After a few turns you’ll see the monastery, the powerful impregnant stronghold towering on a rock. Such remote position of it was strategically favorable as the monastery was simultaneously religious and political centre of Syunik Principality. The monastery was also the residence of Syunik Bishop with vast lands, craft workshops; it even collected taxes from hundreds  of villages. In the 13 th – 14 th centuries the monastery was prospering. It was the time of the Tatev University , the largest centre of philosophy and science of medieval Armenia .

The monastery was named so in the honor of St. Eustathius, the pupil of  St. Th 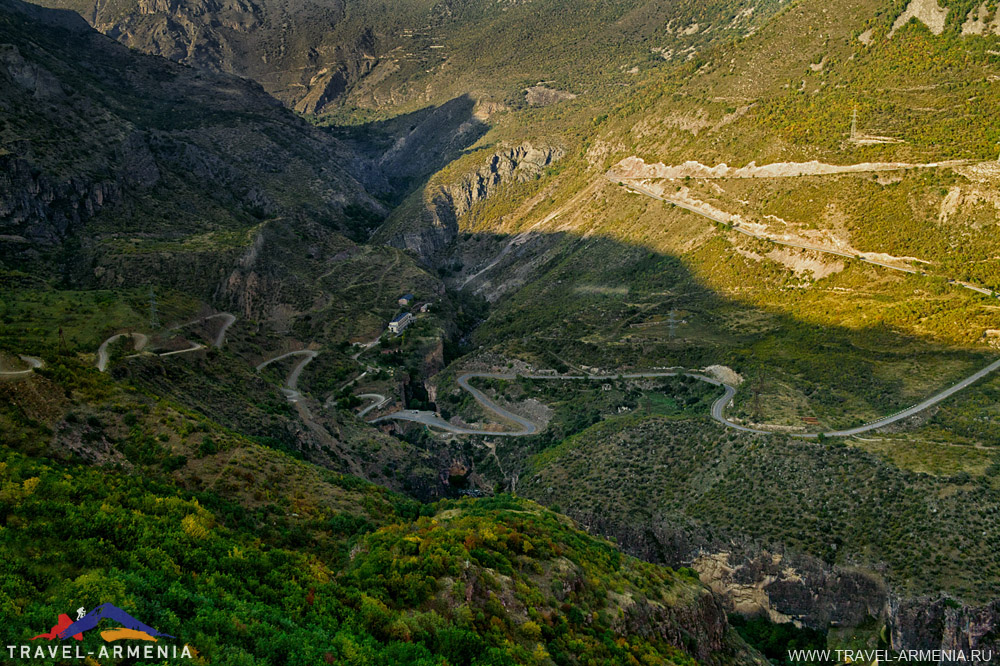 Like his teacher he preached Christianity, and met his martyr death for the new faith in Syunik. Besides, “tatev” meant ‘gime me wings” in old Armenian. Ind eed, located at such a height, Tatev loos as if it reaches for the sky. Its walls seem natural continuation of the rock which uplifted it so high.
The monastery was practically destroyed by the earthquake but it was restored in the 17th century.
Today the architectural complex is presented to us in all its greatness. The center of the complex is occupied by St. Peter and Paul Church (Surb Pogos Petros), the main and largest structure of the monastery.
The church looks as if “growing” on the entire perimeter from the stone base and gives s pecial grandeur to the composition. The temple was constructed in 906. The architecture of the cathed ral is a little arc haic; however, in it possesses some new lines. Especially noticeable are big external volumes of the church dome, and the high round drum topped with umbellate dome. The bas-reliefs decorating the windows are interesting – each of them is a human face with snakes’ heads facing them. The huge cathedral used to be painted with frescos which have partially survived. 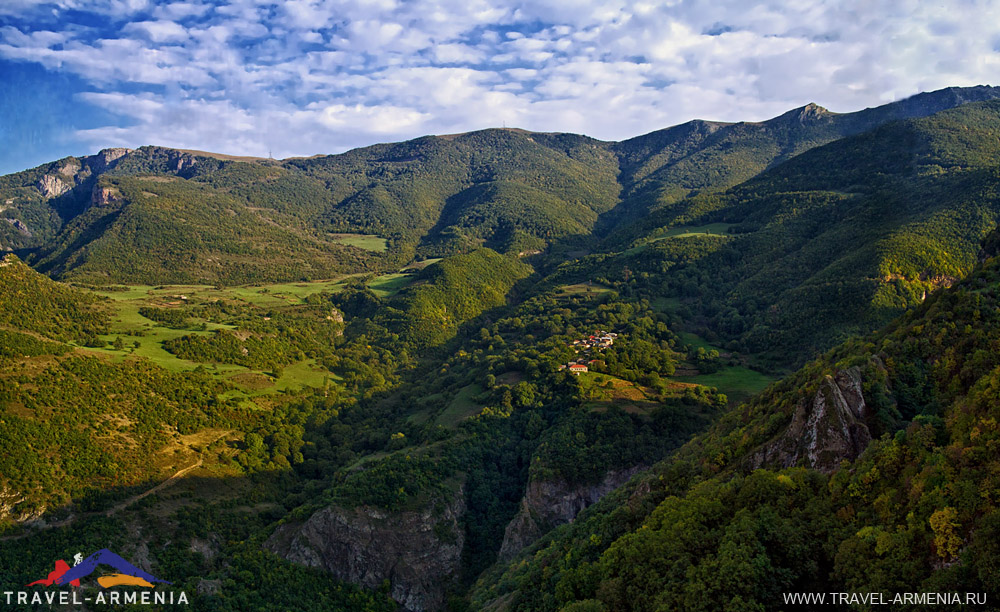 The most ancient church is St. Gregory the Illuminator Temple . It was constructed in 848 by Syunik prince Pilipos; he also presented Tatev village to the monastery. The temple adjoins the south side of the main cathedral, St. Peter and Paul Church.

The cult monument, Gavazan (Staff), is among the number of unique works of architectural-engineering art of Armenia .

It was erected in 904 in the court yard, near the monastery premises. This octahedral column made of small stones has the height of 8 m; its top is finished with ornate eaves with a khachkar on top.
St. Astvatsatsin church-over-the-gate (1087) is a rare example of Armenian architecture in terms of its location. It has a small domed hall with niches on every facade except for the western one with tapered umbrella-type roof.

The church is surrounded by the rooms of the prior, belfry, vaulted refectory with a kitchen, pantries, dwellings and premises built in the 7 th – 18 th centuries.At 1390-1435 under the monastery was operated a University of Tatev – the largest centre of philopophy and other science of medieval Armenia. The school was of great importance. Presently, similar schools were opened in various monasteries of Syunik, such as Gndevank, Tsakhats-kar and Bgheno-Noravank. The school played an especially active role in the development of scien 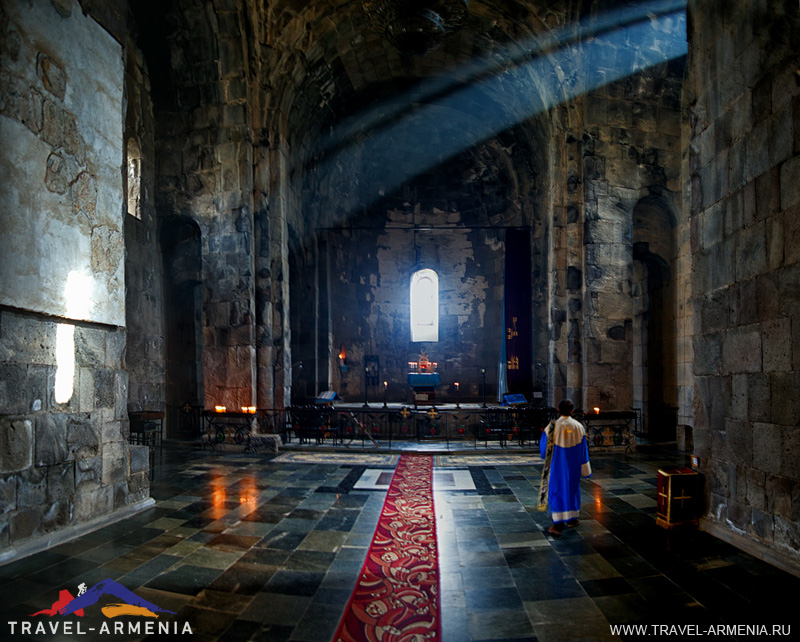 ce and art in the 14th-15th centuries, under Ovnan V 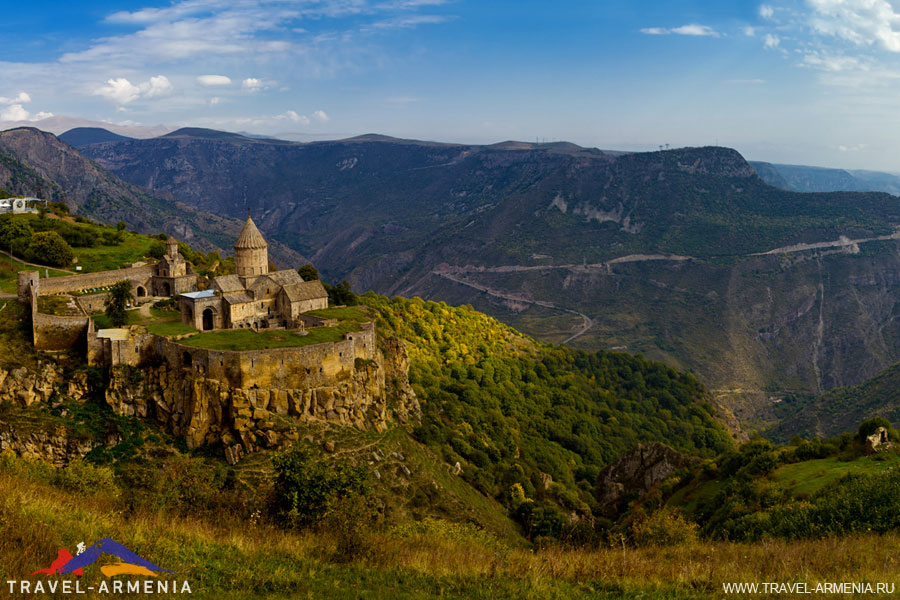 Silently floating over the surrounding mountains, Tatev is very impressive. The labyrinths of the narrow passages leading from spacious halls to other premises of unidentified purposes, the outlines of niches showing through the darkness, stone staircases, arched doorways to nowhere.
Standing on the edge of it takes your breath away – somewhere down below the river flows and crowded velvet green hills stand in silence..

The world’s longest 5.7-kilometer ropeway called “Wings of Tatev” opened in Armenia on October 16, 2010. It will lead to the medieval Tatev Monastery located in the Tatev village of Syunik region, southern Armenia. The ropeway that can carry a visitor to the Monastery in 12 minutes will also be included in the Guinness Book of Records.

Tour to Tatev – one day