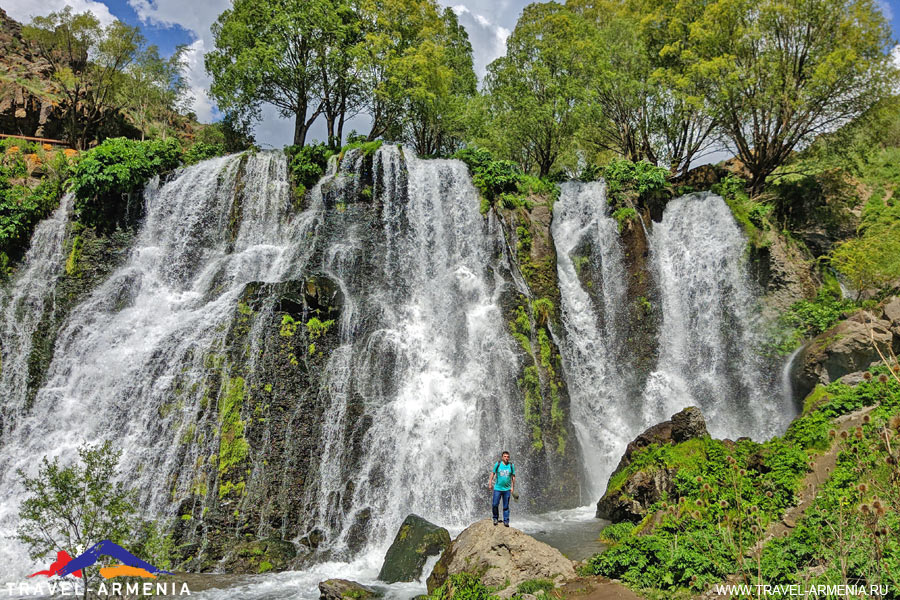 In the first place is undoubtedly a waterfall on the Shake River! Seeing it once you will understand why it is the most famous waterfall in the country.

Dozens of white noisy jets fall from an 18-meter height into the gorge, fanning out over the slope. A beautiful legend is connected with the appearance of the waterfall. In ancient times, the maiden Shake lived, the leader of the foreign army could not resist her beauty, but the proud Shake did not want to obey and leave with the foreigner and rushed from the highest cliff. Her white dress opened in the wind and turned into white jets of a waterfall that sheltered Shake from the warrior. In second place is the Trchkan waterfall. Its waters fall at an angle of 90 degrees from a height of more than 22 meters. Since 2008, Trchkan has been included in the list of natural monuments of Armenia. The Trchkan waterfall is hidden in a small gorge and is not immediately visible from all points, but only the rumble of the water mass falling from a height is heard. But, at some point, as if from around the corner, a water plume of amazing beauty becomes visible. The etymology of the name is interesting. “Trchkan” means “jumping” in Armenian. Locals believe that the waterfall is so named because the spawning trout jumps directly above the waterfall to a height of 20 meters. 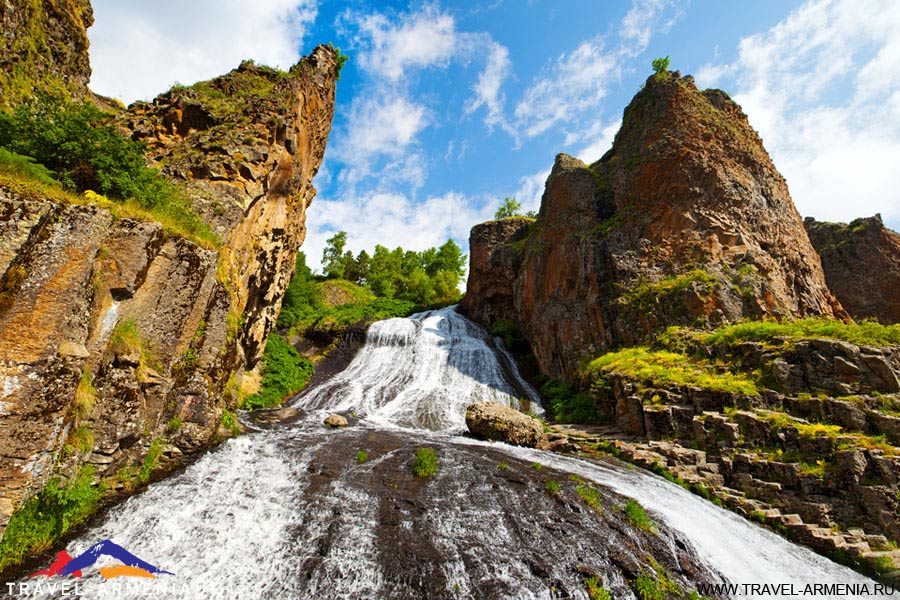 In third place is the icy waters of the famous waterfall in Jermuk, falling over three terraces from a height of 68 meters. Its waters are really healing, because it is part of the water system of the Jermuk resort with famous mineral waters. The waterfall is called “Mermaid Hair”. According to legend, a beautiful princess fell in love with a shepherd. The princess every evening lowered ropes into the gorge for her beloved, along which he climbed to her. Upon learning of this, the father cursed the princess and took away the ropes. But the princess did not submit to the will of the king and lowered her long hair to her beloved. At that moment, a curse overtook her – she turned into a mermaid, and her hair turned into a waterfall. 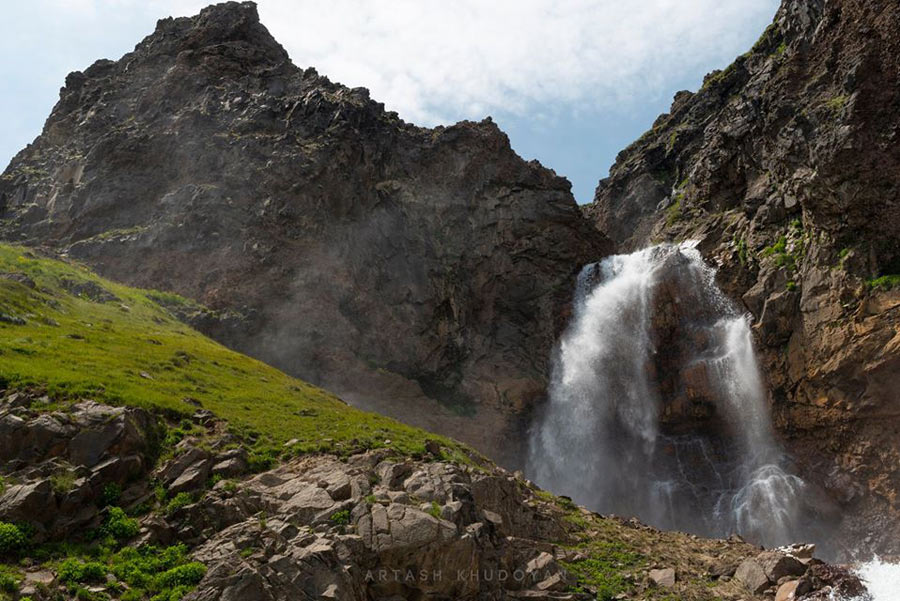 The fourth in line of beautiful waterfalls is Gegharot, the highest mountainous waterfall in Armenia. It is located on the river of the same name, flowing along the slopes of the Aragats River at an altitude of more than 3000 m above sea level. Some researchers believe that Gegharot is the highest waterfall in the Caucasus. You can look at the waterfall only in positive temperatures, in winter it freezes, and the slopes of Aragats become difficult to climb. 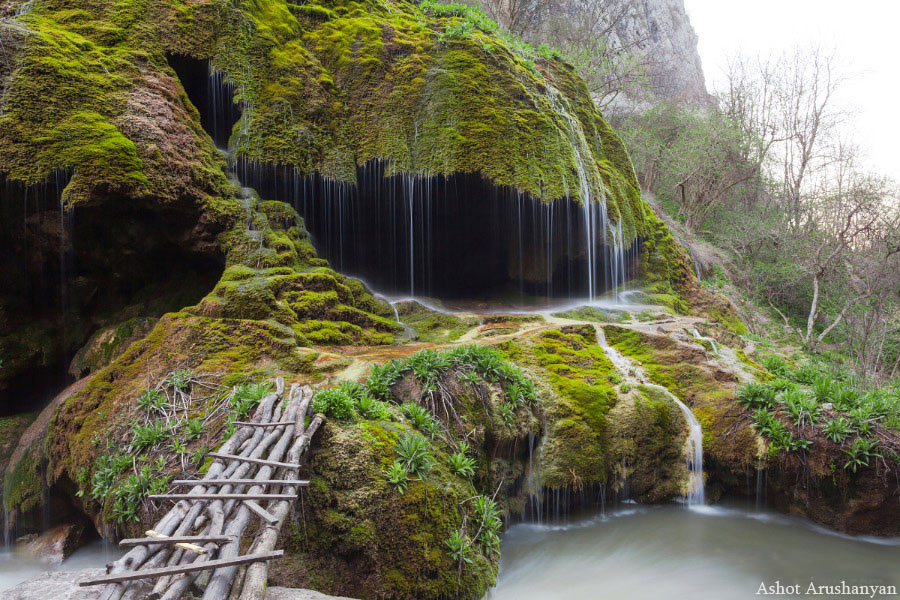 Another well-known waterfall is Umbrellas, in fifth place on our list. Umbrellas are located in the Hunot Gorge, that is, the Cornelian Gorge, so named because of the lush thickets of wild dogwood. Umbrellas are a unique natural phenomenon: water flows down the semicircular stone steps like rain over a real umbrella. And due to the fact that the stones are completely covered with bright green moss, this association is enhanced. Umbrellas are located in Artsakh, not far from the city of Shushi, in the gorge. Hiking trails of varying difficulty with picturesque views lead to them.

Our guides will not only help you not to get lost on the way to the natural monument, but will also show you the sights along the way. 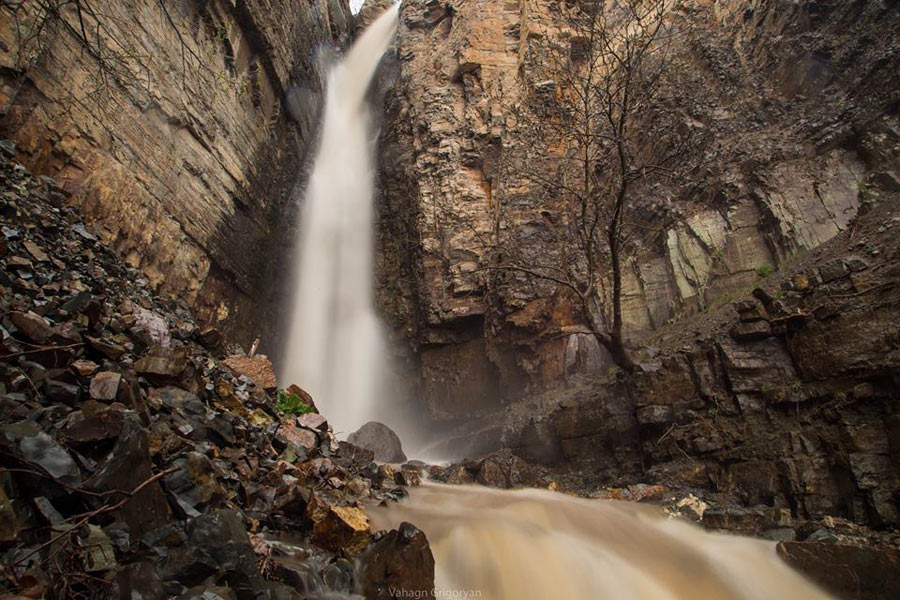 The waterfall in the ancient Khosrov forest came in sixth place. Khosrov waterfall is not very high – only 10 meters. But this is also its advantage. Under it you can and even allowed to swim. And in summer it is very pleasant: to get up after the scorching sun under the cool jets of a waterfall surrounded by forests and mountains.

For this kind of spa treatment, you should go in the warm season, contact us and we will pick up a tour to Armenia, with a visit to the Khosrov Reserve and a waterfall. 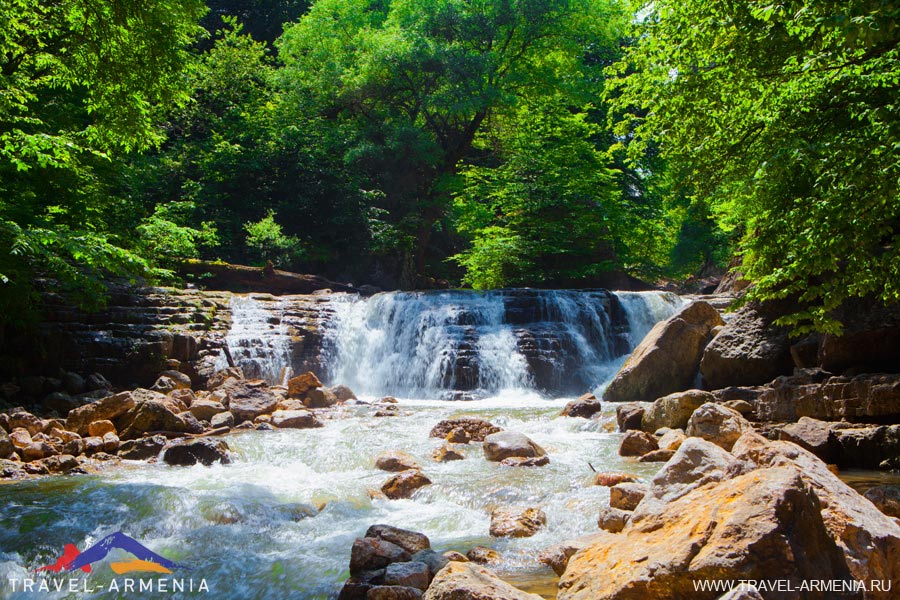 The waterfall in the Lastiver Gorge occupies the seventh line of our rating. We have already written about the fabulous places in Lastiver, but we would like to separately mention the melodious, gentle and cool waters of the waterfall in Lastiver. In spring, they become even more full-flowing, like any mountain waterfalls and powerful streams descend from the slopes!

Come to Armenia in the spring and you will be able to see with your own eyes how the snow melting on the peaks makes the fragile mountain rivers full-flowing and swift. 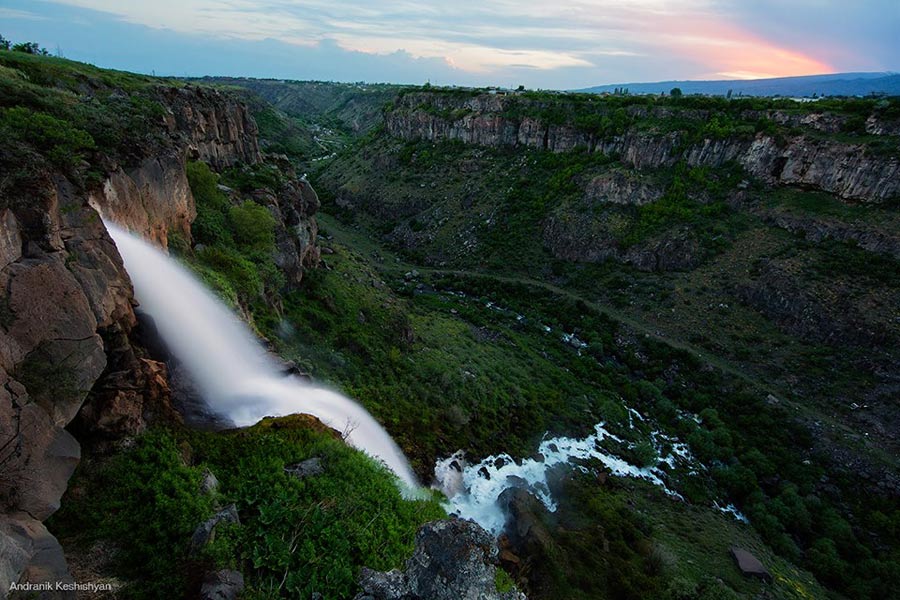 The highest waterfall in Armenia is located on the eighth place. This is the Kasakh waterfall, named after the mother river – Kasakh. This is a strong and ancient river, which was the only one able to break its channel in the impenetrable volcanic rock of the mountain; among the constant eruptions, the channels of many rivers were destroyed. The river flows smoothly, but in one place the channel breaks off and the river overthrows its waters at great speed down into the gorge with a powerful stream. The roar of Kasakh will be heard from afar, and the view of the huge waterfall will forever remain in your memory.