Hiking in Armenia will give you the opportunity to visit the most beautiful places where no bus, minivan or even SUV can reach. We have selected for you the 10 best hiking tours in Armenia! Over the years of work and decades of walking around Armenia, our team has traveled thousands of kilometers to the most beautiful, unusual and mysterious places in our country. Armenia from deep caves, green valleys and blue lakes to frosty peaks – in our top! Mount Aragats is the highest mountain in Armenia. And technically, these are 4 ascents, because Aragats is an extinct volcano with a large crater and four peaks: South (3879m), East (3916m), West (4008m) and North (4092m). And they are all interesting in their own way. It is safest to climb Aragats from mid-summer and, depending on the weather, until mid-September or even October.

If you are an experienced climber, you can climb all the peaks. But we advise you to either limit yourself to the South Summit or the South and West – these directions do not require special skills. The most difficult peak is the North, only experienced climbers climb here.

Absolutely unique views of mountainous Armenia open up from Aragats, and the view of a giant crater fascinates even experienced climbers. 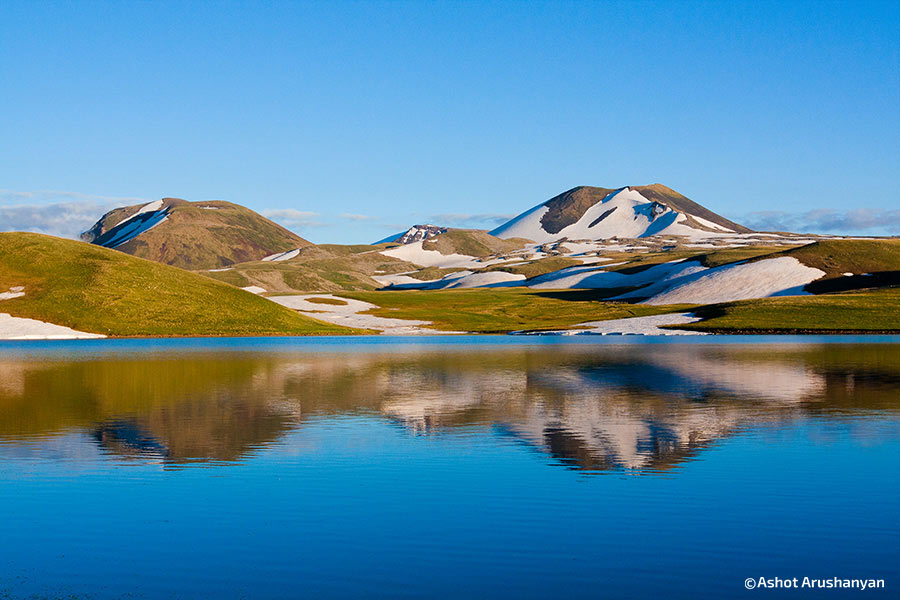 The Geghama Range, of which Mount Azhdahak is a part, is also a series of extinct volcanoes. The pearl of this mountain range is no exception – Azhdahak (3598m). In summer, the ridge is covered with greenery, mini-icebergs float in the lakes, and the view of the steely Sevan becomes unique. No special skills are required to climb to the top. And at the top, in the very crater of the volcano, you will find a small makeshift parking lot – a stone house where you can hide and enjoy the views. Nearby, you can (and should) pitch a tent and spend the night to meet the sunrise with a view of the Geghama Sea, as the locals call Lake Sevan. It is better to plan this tour for 3 days to see all the beauties of the Gegham Mountains. In addition to Azhdahak, this is Lake Akna, and ancient petroglyphs and vishapakars. Ukhtasar is located in the Syunik region. The name of the mountain has two translation options depending on the pronunciation: “Mountain of Pilgrims” and “Camel Mountain”. Ukhtasar was sacred places of the pre-Christian era. On the way to the mountain range, among which lies Ukhtasar, you will see ancient petroglyphs depicting the life and myths of ancient people. According to scientists, the oldest petroglyphs are over 7000 years old. Pilgrims have been coming here for thousands of years. And at the top you will find the same ancient volcanic lake, never melting snow and incredible frosty air. Lastiver is translated from Armenian literally as “up the dam”. The name of the area was given at a time when it was here, among the densest Armenian forests, among fabulous waterfalls, rivers and rocks, that the inhabitants of nearby villages were fleeing from the Mongol invasion. In XIII-XIV, the most difficult steep path with wooden ladders led to salvation in a large cave. There are still preserved bas-reliefs from that time.

Trekking to Lastiver is not just a three-hour journey through the thicket of the forest among the rivers, but a journey in which you can see all the beauties of the Tavush region, relax in a specially equipped village for tourists and see eagles soaring in the canyon.

As Ararat rises above the city of Yerevan, so Mount Khustup fills the skyline of the city of Kapan. The famous commander Garegin Nzhdeh fought and was buried on the slopes of Khustup. It is the monument dedicated to him that will meet you almost at the very top. And on the way there, you will definitely meet wild horses that have found refuge on this proud mountain. And green fragrant meadows, with a scattering of flowers. And after passing the “Gate”, a rock similar to the gate, you will see a completely different mountain – with dark rocks, impregnable ledges and cold beauty.

6. Treking in the Dilijan Reserve 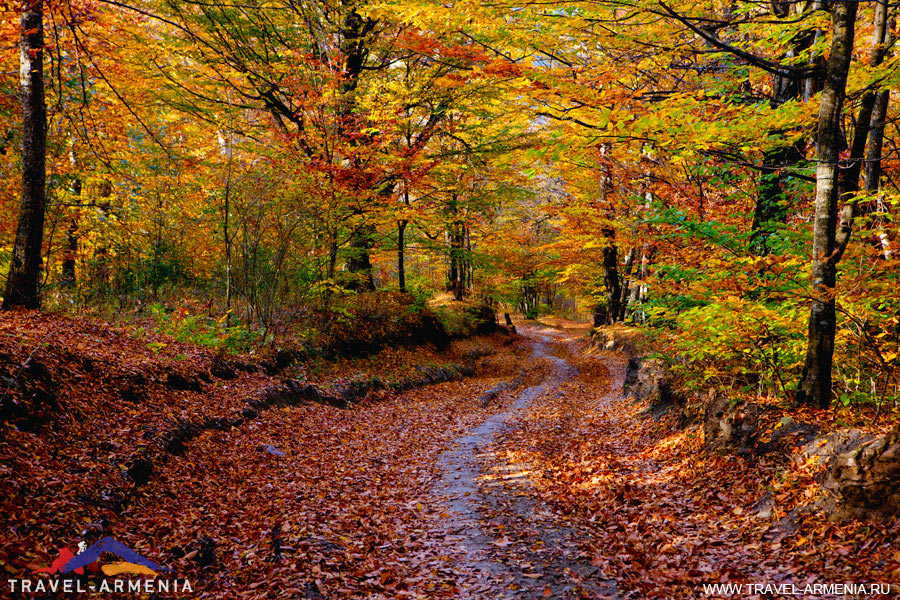 In Dilijan, in one of the greenest areas of Armenia, there are two stunning lakes – Parz and Gosh. A trip to Armenia cannot be considered complete without a trip to Dilijan. The path to them is relatively simple and suitable even for unprepared tourists. An exciting journey through dense forests awaits you: fragrant in spring, full of colors in autumn and filled with long-awaited coolness in summer. On the way you will meet small rivers, amazing views of the Ijevan Range and ancient khachkars. Walk with our guides all the way from Lake Parz surrounded by dense forest to the small mountain lake Gosh, not far from the Goshavank monastery. For those who love extreme tourism, we suggest visiting the Hell’s Gorge, located not far from the famous village of Areni.

Jokhki Dzor (as the name sounds in Armenian) is a gorge with sheer cliffs and 400 meters deep. You can descend to the bottom of the gorge at several points and follow it for several kilometers to the next known exit point, or climb one of several climbing routes. The gorge is little explored and in order not to get lost you need an experienced guide. But all the difficulties are worth it to look at the blue sky through the reddish rocks, the branches of the wild fragrant dog rose, to wash in the icy river or drink from one of the mineral springs.

7. Hike to the Smbataberd fortress In Vaits Dzor, on a hill between two impregnable gorges with fast mountain rivers, there is a fortress of the 5th century (and according to some sources, defense structures were there before). Smbataberd was built as a canonical medieval fortress and fell only once during its existence, and then under the onslaught of cunning – the enemies blocked the water supply and the defender still had to surrender. It is noteworthy that the water supply was found by horses, which, according to legend, were fed with salt so that they, tormented by thirst, would look for any source of water.

It is not difficult to reach the fortress, it is 2 kilometers along a pleasant country road with views of the fertile plain of Vaits Dzor.

9. Hiking in the Vorotan Gorge 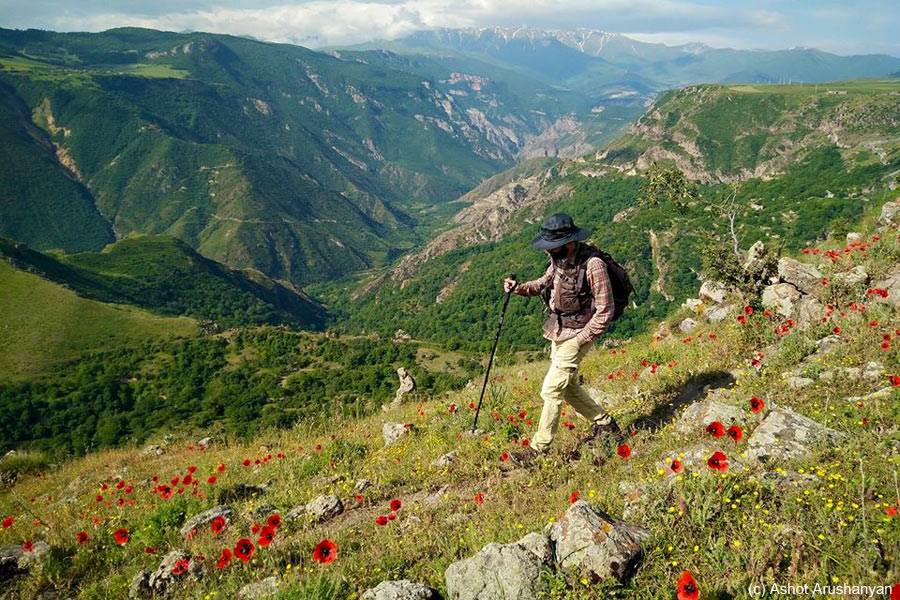 The world-famous Wings of Tatev cable car leads to the ancient and one of the most famous Tatev monasteries in Armenia. Before the construction of the longest cable car in the world, one had to get to the Tatev monastery complex along the road that crossed the deep Vorotan gorge, cross the unique natural bridge – the Devil’s Bridge over the Vorotan River and climb again along the winding road to the monastery. Now the road has been repaired and going down you can go to two abandoned ancient villages – Old Khot and Old Halidzor. Old Khot is called the Armenian Machu Picchu, but Old Khot is much older – historians believe that the first settlers appeared there in the 1st-2nd centuries. BC. And they lived in mountain villages until the 70s of the last century, so the villages, although abandoned, are almost perfectly preserved and you can see buildings from various eras there! In the end, we saved a real pearl – Mount Armagan. This is an undeservedly unpopular destination. But every year there are more and more tourists, so you should have time to buy a tour to Armenia and see Mount Armagan in its original form. This is a small extinct volcano with a crater lake, not far from Lake Sevan. On the slope, on the site of an ancient temple, a modern church was built, which looks like a living picture against the background of the foggy sky over Armagan and alpine meadows.

Of course, the list will be incomplete if we do not recommend climbing Ararat for you. The biblical Mount Ararat, despite the fact that it is physically located on the territory of another state, is the main symbol of Armenia! 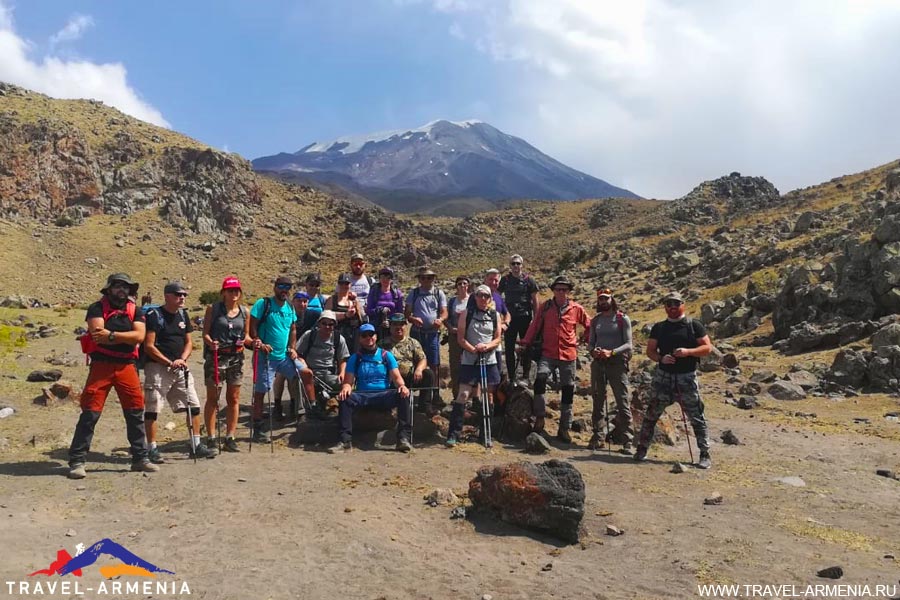 Contact us and we will help you choose the most interesting hiking and trekking tour in Armenia, including all the places that interest you!