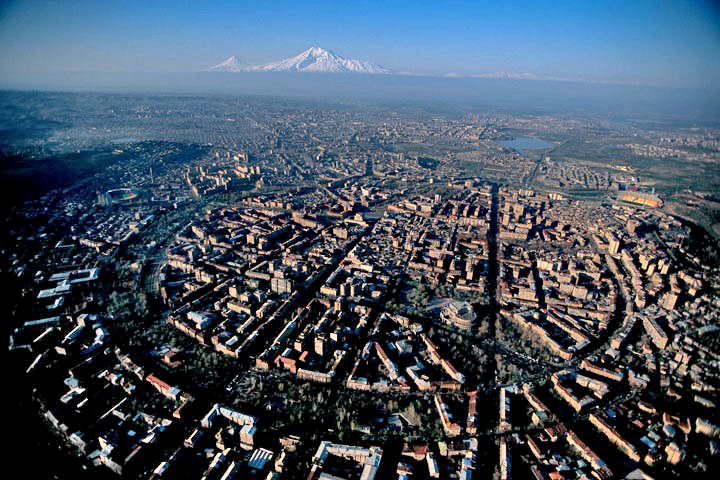 The city, ancient of Rome, is the name of Yerevan. And not without reason. In 2015, the capital of sunny Armenia celebrates its 2797th birthday.
Yerevan is a city that can surprise and conquer the hearts of even the most picky aesthetes. And it’s not just about sights and architecture. The soul and heart of the city are Yerevan residents, soaked in the sun and ready to share their warmth with every guest of the capital. The history of Yerevan has many ups and downs, but in spite of everything its inhabitants remain optimistic, cheerful and hospitable masters of the city, which attracts more and more tourists from year to year from all corners of the world.
Yerevan is located in the north-eastern part of the Ararat plain located in the center of the Armenian highland. To feel the magical appeal and strength of the stones, it’s enough just to peer into the distance: in the north-west you will see Mount Aragats, in the north – Kanaker plateau, and in the east – Geghama mountains. To the south stretches the valley of the Araks River, beyond which stands the famous mountain range – Bolshaya and Maly Ararat. In clear weather, its snow-capped peaks poured into the sun, emphasizing the power and beauty of the highest volcanic massif of the Armenian uplands.
Due to the mild, continental climate, the weather in Yerevan is comfortable at any time of the year. Even in winter, sunny days are enough to not feel uncomfortable even at minus temperatures.
According to the legend, Yerevan acquired its name thanks to Noah, who exclaimed “Yerevats!” (She appeared) when the top of Little Ararat appeared from under the water. The foundation year of Yerevan is considered to be the year of foundation of the Urartian city of Erebuni – 782 BC. e., located on the southern outskirts of modern Yerevan.

The capital of Armenia has been rebuilt many times, but the townspeople love and remember the old Yerevan, and protect the history of the city in stone. Near the Cascade a monument to the architect Alexander Tamanyan was erected, thanks to the work of which the city of the rose stone was transformed into a modern capital, the cultural center of Armenians all over the world.
The sights of Yerevan, such as the Republic Square, the Matenadaran Institute of Ancient Manuscripts, the Opera House, the Cascade, etc. are symbols of the history of the capital, you can feel it only after visiting there.

Annually in October, the day of the capital of Armenia is celebrated – the Erebuni-Yerevan holiday. On this day, the city hosts numerous concerts and shows.
Yerevan is a city that has been open for 2797 years to anyone who wants to soak up the history and color of one of the most ancient states and to enjoy the warmth of the soul, without which it is impossible to do without such an ambiguous 21st century.