Matenadaran branch was opend at Gandzasar monastery in Artshakh 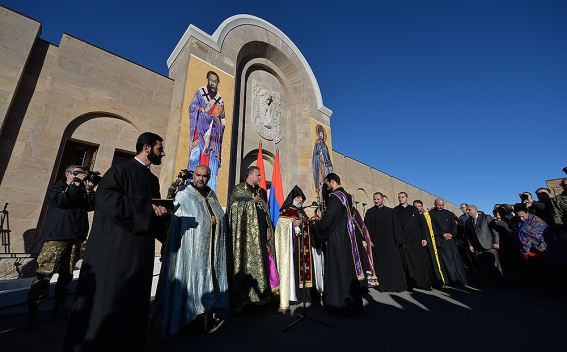 In Nagorny Karabakh, the monastery complex of Gandzasar crossed the throne opening of the Armenian branch of the Institute of the Seven Pillars of Matenadaran. The branch has more than 100 old books and handouts.
Opening in Nagorny Karabakh, the branch has received the name “Matenadaran Mesrop Mashtots – Gandzasar”.
The President of the Republic of Armenia, who served as a ceremonial, studied the Science Centers in Gandzasar “Evangelia Gulistan” in the XII-XIII centuries, and the Gospel XVII of the Gospel of Aces of the Armenian Apostolic Orthodox Church.
The obscurant center was separated from the external links and protocols of the First Slavic Sv. Archbishop Echmiadzin Nathan Oganessian.
“There are more than 100 exhibitors from Matenadaran in Armenia. Here you will be able to function in the research center for their research, “Narine Agabalian, Minister of Culture of Nagorny Karabakh, told. It turned out to be a fact that the stock exponents will be periodically populated, and collectors or simply, as long as the old books are preserved, will take care of it.
“The branch office in Nagorny Karabakh has been for decades, and symbolically, this is the only Armenian culture center opened in the Armenian Genocide Centennial,” said Matenadaran Grachya Tamrazyan, director of the Armenian Institute of the Armenian Genocide.
The director of the state-of-the-art historian Melanie Balayan said that “Matenadaran in Armenia is one of the most famous cultural centers in the world, the opening of the branch in Artsakh (Nagorny Karabagh) will be a great blessing for the sake of history and culture.”
Matenadaran branch in Gandzasar, reconstructed by the beneficial affinity of the “Pyunik”, was reported to correspondent in the Nagorny Karabakh.