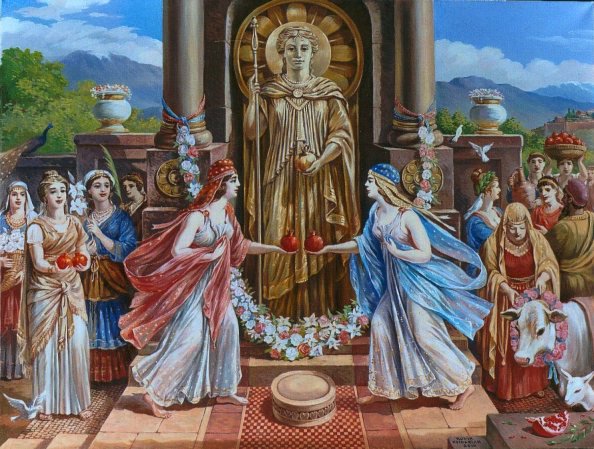 Today in Navasarad that is celebrated from pre-Christian times. From time immemorial, this day, dedicated to the pagan gods, was celebrated on August 11.

Navasard – New Year, which was celebrated among the ancient Armenians. August 11, as the ancient Armenian chronicles maintain, in 2492 before the birth of Christ the Armenian progenitor Hayk defeated Bel and laid the foundation for the future Armenian state. This day – August 11 – was the beginning of a new year for the Armenians.
The meaning of the holiday was not only in the fun, but also in the unity of the people. The festivities lasted several days, and each day was filled with special meaning. The Navasard festival (“nav” – “new”, “sard” – “year”) began with a majestic act: the high priest, standing on the top of Mount Aragats, lit a torch, and he was carried to the pagan temple of Garni.
One of these days people were drinking sweet drinks and light wines. Because of different climatic conditions of Armenia in different regions, different dishes were served on the festive table. However, on the New Year’s holiday all the dishes had something in common that emphasized the national characteristics. In these dishes, the first place was occupied by round wheat, which grew only in Armenia.

The Navasard holiday did not recognize the rich and the poor. All these days were equal and together they made a pilgrimage to shrines and temples, especially to the temples of the supreme goddess of Armenians – Anait – in Erez, Armavir, Artashat and Ashtishat.

Earlier this holiday was celebrated on Mount Nemrut (now Turkey). Today only pagan Garni survived from pagan Armenian churches, where to this day local residents and townspeople go to celebrate this, perhaps, the oldest Armenian holiday.