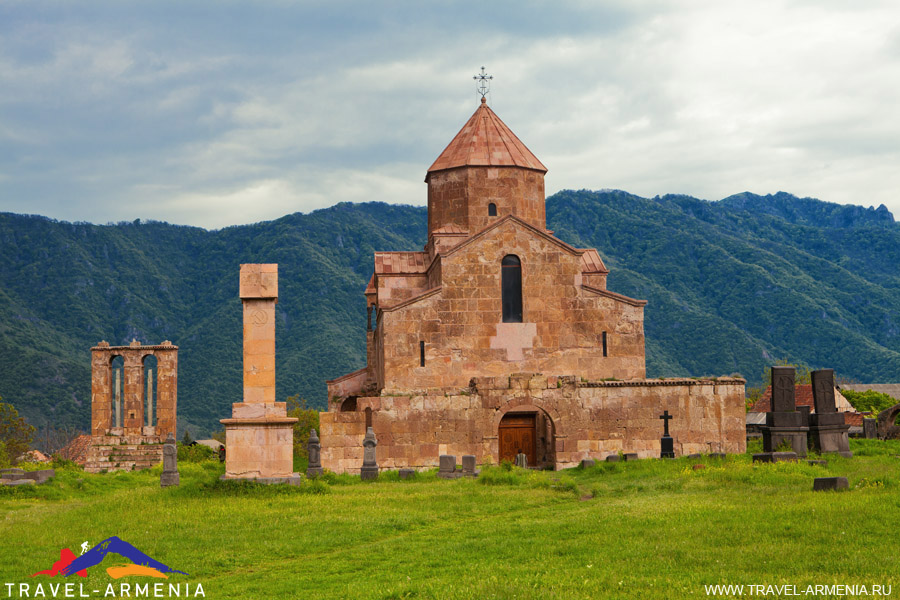 Odzun is a historical town in the Armenian province of Lori. It is situated on a plateau above the left bank of the Debed river gorge, a few kilometres south of the town of Alaverdi. It is famous for the 5-7th century.

Odzun church one of the finest Armenian basilicas with a cupola. The first church appeared here in the 6th century. In the 8th century it was reconstructed by Hovhannes III Odznetsi  who served as the katholikos between 717 and 728 and was, as his name suggests, from Odzun. This is the time the church got its current form of a pink felsite basilica with three naves, the two side naves being narrow.

At the northern (not preserved anymore) and southern side there are unusual arcaded cloisters and the west cloister has a blind wall with an arched entrance in the middle. The roof is barrel vaulted. Four columns support the rib vaulted tambour and there are two more columns at the western part of the church. At the eastern fa?ade above the central window one can observe a carving of Christ with the gospel of St. John and two angels below.

At the southern fa?ade, at each side of the central window there are two angels and traces of another figure, probably Christ. Much later, in the 19th century two small belltowers were added. There are numerous gravestones of the clergy around the church and a funerary monument. Its stepped platform supports two carved stelae between double arches.

The east and west sides of the monument are carved with scenes from the Bible and introduction of Christianity in Armenia. Its north and south side are carved with geometrical motifs and floral shapes. It is suggested that this monument commemorates Hovhannes Odznetsi, but its style suggests that it was probably erected earlier, in the 6th century.

This is one of only two such funerary monuments in Armenia. The one located in Odzun was given as a gift to Armenia from an Indian King approx in the 8th century. The other one is situated in Aghudi in southern Armenian province of Syunik.