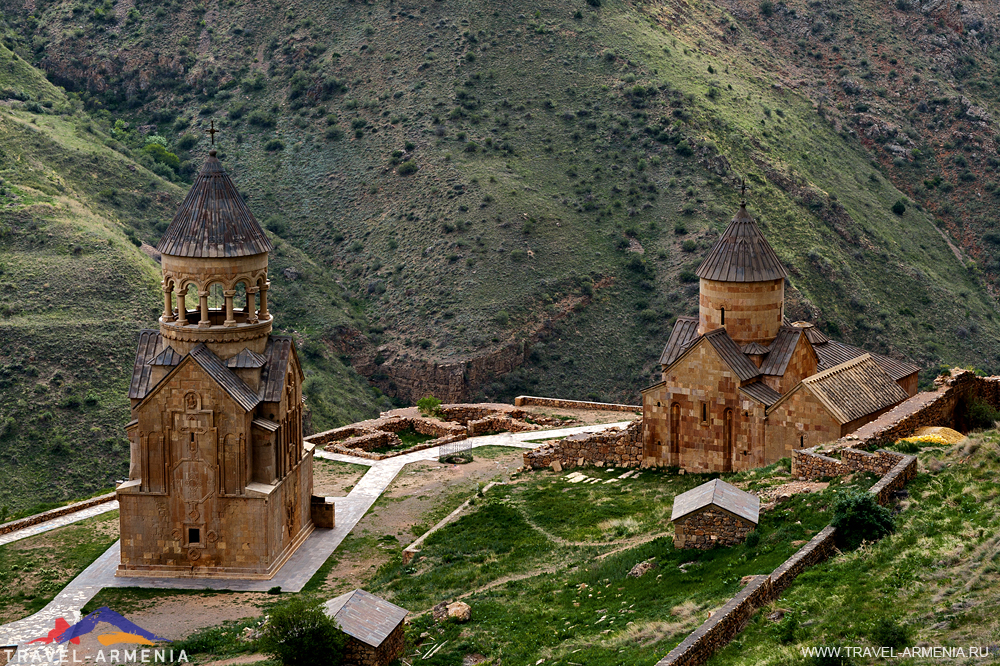 Noravank meaning new monastery, is a 13th century monastery, located 122 km from Yerevan in a narrow gorge made by  the Darichay river, nearby the city of Yeghegnadzor, Armenia. The gorge is known for its tall, sheer, brick-red cliffs, directly across from the monastery. The monastery is best known for its two-storey S. Astvatsatsin church, which grants access to the second floor by way of narrow stones jutting out from the face of building. In the 13th–14th centuries the monastery became a residence of Syunik’s bishops and, consequently. a major religious and, later, cultural center of Armenia closely connected with many of the local seats of learning, especially with Gladzor’s famed university and library.

Noravank was founded in 1205 by Bishop Hovhannes, the former Abbot of Vahanavank. The monastic complex includes the church of S. Karapet, S. Grigor chapel with a vaulted hall, and the church of S. Astvatsatsin (Holy Mother of God). Ruins of various civil buildings and khachkars are found both inside and outside of the compound walls. Noravank was the residence of the Orbelian princes. The architect Siranes and the remarkable miniature painter and sculptor Momik worked here in the latter part of the thirteenth and early fourteenth century.

The nearest and grandest church is the Astvatsatsin “Mother of God”, also called Burtelashen “Burtel-built” in honor of Prince Burtel Orbelian, its financer, is situated to the south-eas 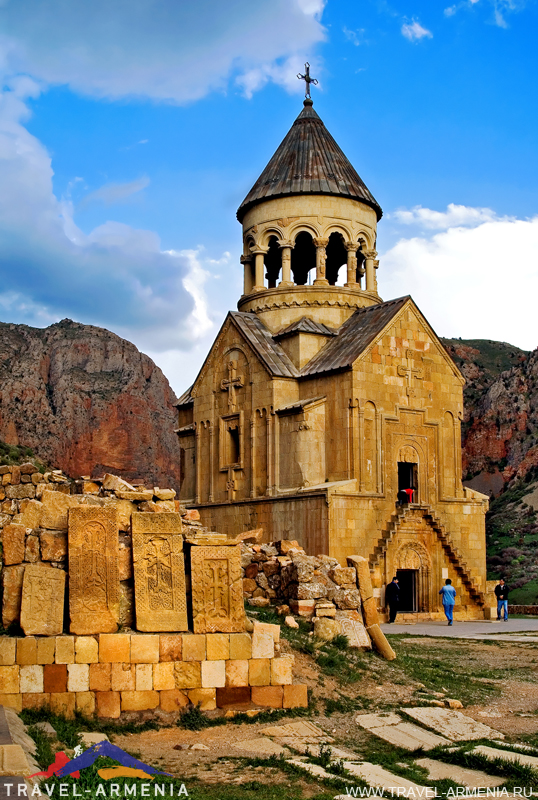 t of and at an angle to St. Karapet church and its gavit. The church, completed in 1339, is said to be the masterpiece of the talented sculptor and miniaturist Momik, who designed it, and was also his last work. Near the church there is his tomb khachkar, small and modestly decorated, dated the same year. Narrow steps projecting from the west façade lead up to the entrance to the church/oratory. Note the fine relief sculpture over the doors, Christ flanked by Peter and Paul.

Burtelashen is a highly artistic monument reminiscent of the tower-like burial structures of the first years of Christianity in Armenia. It is a memorial church. Its ground floor, rectangular in the plan, was a family burial vault, and the first floor (second to Americans), cross-shaped in the plan, was a memorial temple crownedwith a multi-column rotunda. Burtelashen temple is the architecturally dominant structure of Noravank. An original three-tier composition of the building is based on the increasing height of the tiers and the combination of the heavy bottom with the divided middle and the semi-open top. Accordingly, decoration is more modest at the bottom and richer at the top. Employed here as elements of interior decoration are columns, small arches, profiled braces forming crosses of various shapes, medallions, window and door platbands. The western portal is decorated with special splendor. An important role in its decoration is played by cantilever stairs leading to the first (second to Americans) storey across the ground-storey facade, with profiled butts of the steps. 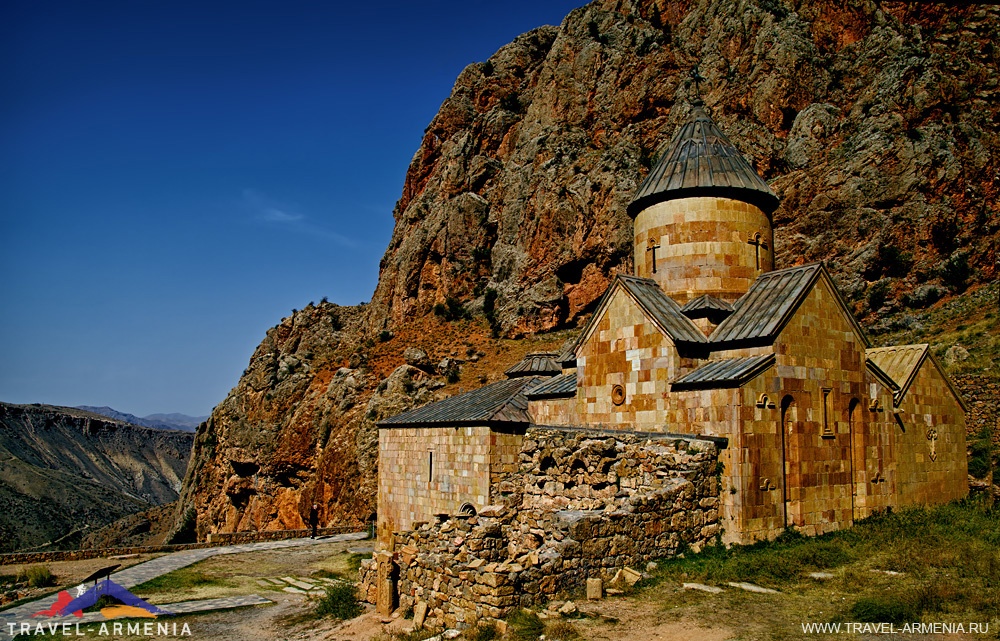 The doors are framed in broad rectangular platbands, with ledges in the upper part, with columns, fillets and strips of various, mostly geometrical, fine and intricate patterns. Between the outer plathand and the arched framing of the openings there are representations of doves and sirens with women’s crowned heads. Such heraldic reliefs were widely used in fourteenth-century Armenian art and in earlier times in architecture, miniatures and works of applied art, on various vessels and bowls. The door tyrnpanums are decorated with high reliefs showing, in the ground storey, the Holy Virgin with the Child and Archangels Gabriel and Michael at her sides and, in the upper storey, a half-length representation of Christ and figures of the Apostles Peter and Paul. 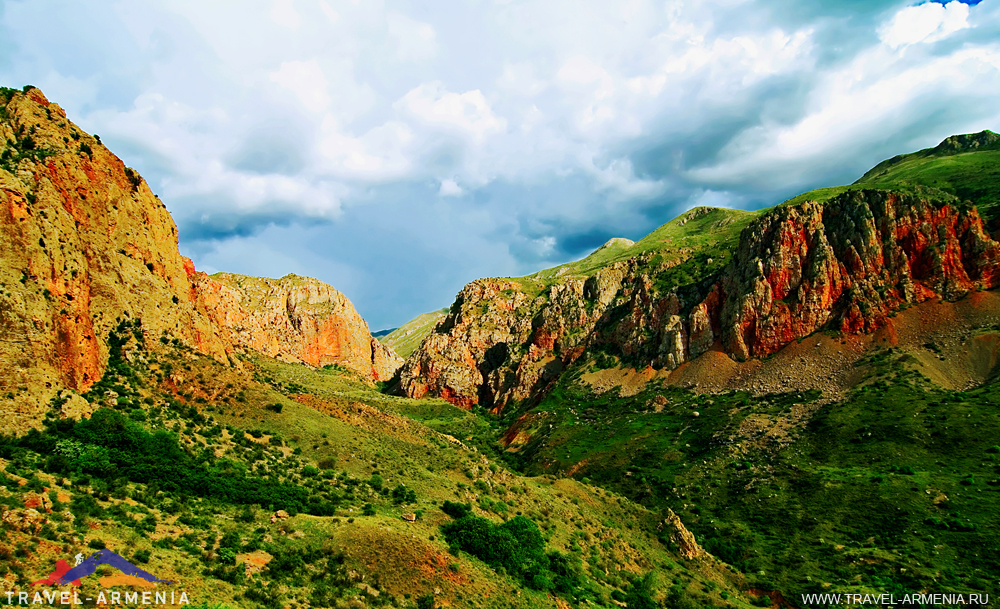 As distinct from the reliefs of Noravanks vestry, these ones are carved on a plain surface, which gives them greater independence. The figures are distinguished by plasticity of form, softness of modeling and accentuation of certain details of clothing. A group of the founders of Burtelashen is depicted on three columns of the western part of its rotunda. The picture consisted of relief figures of the Holy Virgin with the Child, sitting on a throne, and two standing men in rich attire, one of them holding a model of the temple.

The second church is the St. Karapet, a cross within square design with restored drum and dome built in 1216–1227. The church was built by the decree of Prince Liparit Orbelian. In 1340 an earthquake destroyed the dome of the church which in 1361 was reconstructed by the architect Siranes. Forming the western antechamber is an impressive gavit of 1261, decorated with splendid khachkars and with a series o

In 1321 the building, probably destroyed by an earthquake, was covered with a new roof in the shape of an enormous stone tent with horizontal divisions, imitating the wooden roof of the hazarashen—type peasant home. This made the structure quite different from other Armenian monuments of the same kind. The ceiling has four rows of brackets forming stalactite vaulting with a square lighting aperture at the top. A broad protruding girth over the half-columns, the deep niches with khachkars and the low tent-like ceiling almost devoid of decoration give the dimly lit interior a gloomy look. The exterior decoration focus mainly on the western facade where the entrance to the building is. Framed in two rows of trefoils and an inscription, the semi-circular tympanum of the door is filled with an ornament and with a representation of the Holy Virgin seated on a rug with the Child and flanked by two saints.

The ornament also has large letters interlaced by shoots with leaves and flowers. The Holy Virgin is sitting in the Oriental way with Child. The pattern of the rug is visible with drooping tassels. It should be noted that in Syunik temples of the thirteenth-fourteenth centuries the cult of the Holy Virgin was widely spread. She was depicted in relief, and many churches were dedicated to her. The pointed tympanum of the twin window over the door is decorated with a unique relief representation of the large-headed and bearded God the Father with large almond shaped eyes blessing the Crucifix with his right hand and holding in his left hand the head of Adam, with a dove — the Holy Spirit — above it. In the right corner of the tympanum there is a seraph dove; the space between it and the figure of the Father is filled with an inscription.

The side chapel of S. Grigor was added by the architect Siranes to the northern wall of S. Karapet church in 1275. The chapel contains more Orbelian family tombs, including a splendid carved lion/human tombstone dated 1300, covering the grave of Elikum son of Prince Tarsayich Orbelian. The modest structure has a rectangular plan, with a semi-circular altar and a vaulted ceiling on a wall arch. The entrance with an 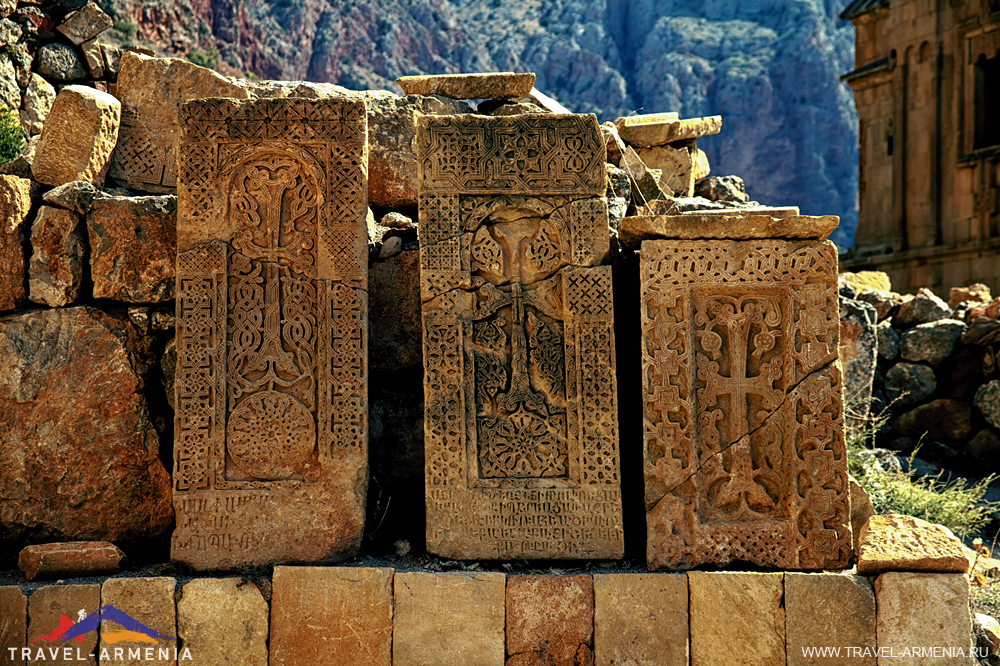 arched tympanum is decorated with columns, and the altar apse is flanked with khachkars and representations of doves in relief.

The complex has several surviving khachkars. The most intricate of them all is a 1308 khachkar by Momik. Standing out against the carved background are a large cross over a shield-shaped rosette and salient eight-pointed stars vertically arranged on its sides. The top of the khachkar shows a Deesis scene framed in cinquefoil arches symbolizing a pergola as suggested by the background ornament of flowers, fruit and vine leaves.