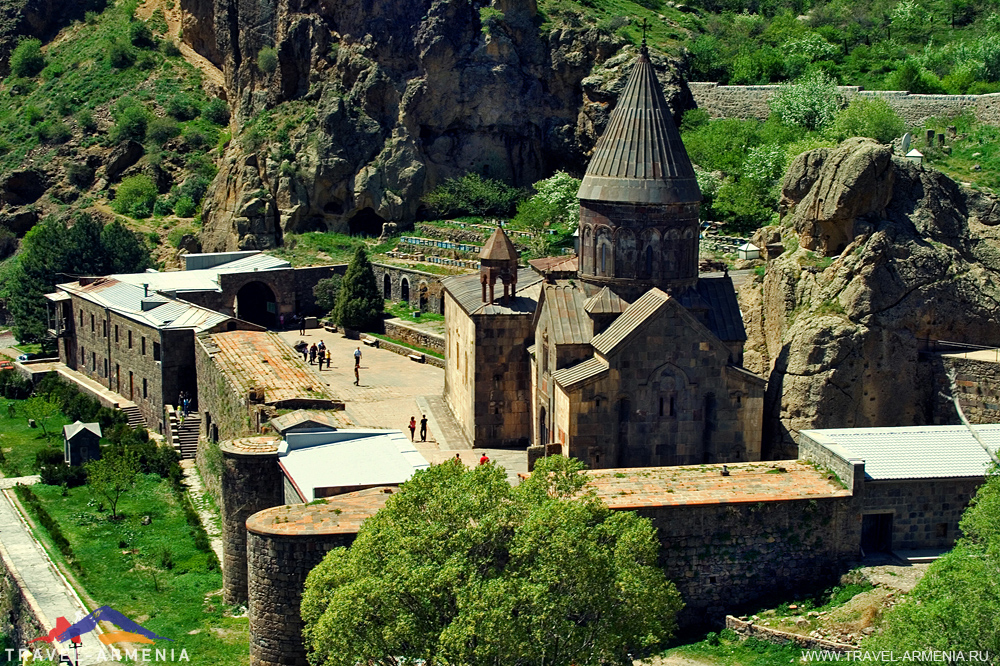 The monastery of Geghard ( meaning spear) is a unique architectural construction in the Kotayk province of Armenia, being partially carved out of the adjacent mountain, surrounded by cliffs.

While the main chapel was built in 1215, the monastery complex was founded in the 4th century by Gregory the Illuminator at the site of a sacred spring inside a cave.

The monastery had thus been originally named Ayrivank, meaning the Monastery of the Cave”. The name commonly used for the monastery today, Geghard, or more fully Geghar davank , meaning “the Monastery of the Spear”, originates from the spear which had wounded Jesus at the Crucifixion, allegedly brought to Armenia by Apostle Jude, called here Thaddeus, and stored amongst many other relics. Now it is displayed in the Echmiadzin treasury.  .

The monastery was founded in the 4th century, according to tradition by St Gregory the Illuminator. The site is that of a spring arising in a cave which had been sacred in pre-Christian times, hence one of the names by which it was known, Ayrivank (the Monastery of the Cave).

The first monastery was destroyed by Arabs in the 9th century. 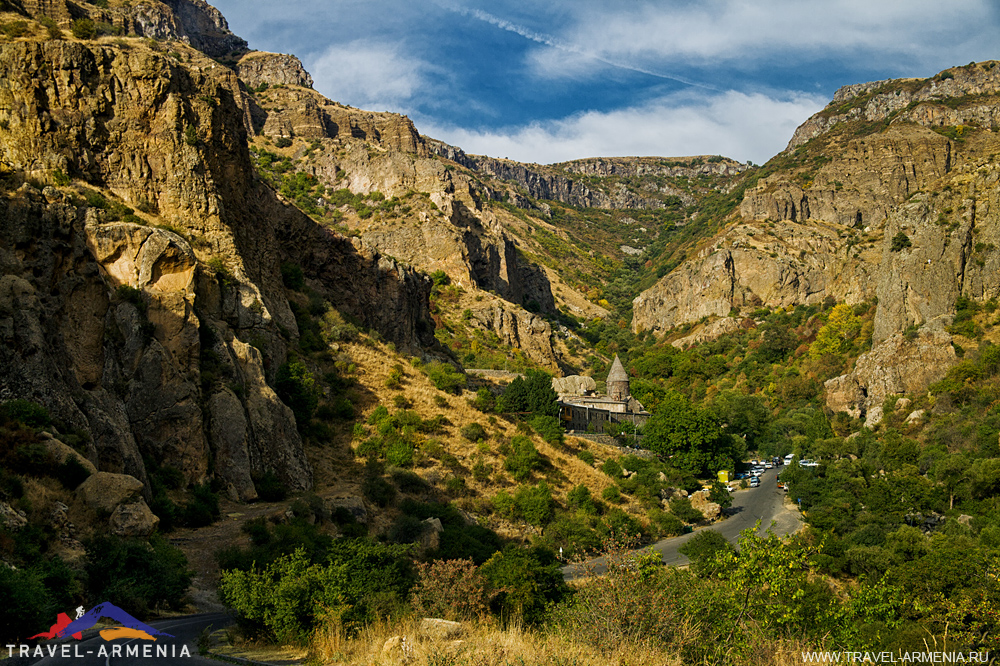 Katoghike Though there are inscriptions dating to the 1160s, the main church was built in 1215 under the auspices of the brothers Zakare and Ivane, the generals of Queen Tamar of Georgia, who took back most of Armenia from the Turks. This is the main church of the complex, and traditional in most respects. This church is built against the mountain, which is not exposed even in the interior.

West of the main temple there is a rock-attached vestry built between 1215 and 1225, linked to the main church. Four massive free-standing columns in the centre support a ro of of stone with a hole in the centre to admit light. The peripheral spaces resulting from the location of the columns are variously roofed, whilst the central space is crowned by a dome with stalactites, the best example of this technique anywhere in Armenia. The gavit was used for teaching and meetings, and for receiving pilgrims and visitors.

The first cave chamber, Avazan (basin), situated north-west of the vestry, is hewn in place of an ancient cave with a spring (a place of worship in pagan times) in the forties of  the 13th century. It is entirely dug out of the rock and has an equal-armed cruciform plan. The interior is lined by two crossed arches with a central stalactite dome.

The main rectangular space of the ch urch is crowned with a tent and complicated with an altar apse and two deep niches, which gave the interior an incomplete cross-cupola shape. 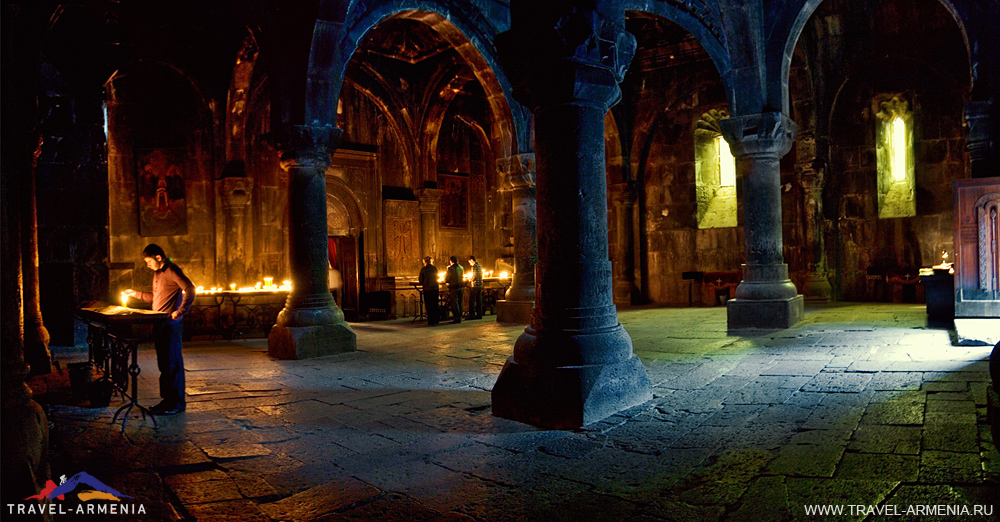 The Proshyans’ sepulcher and the second cave church of Astvatsatsin situated east of Avazan, were hewn in 1283, presumably by Galdzag, too. These are also accessed through the gavit. The jhamatun is a roughly square chamber cut into the rock, with deeply cut reliefs in the walls.

The chapel of S. Gregory the Illuminator (formerly the Chapel of the Mother of God – St Astvatzatzin), built before 1177, stands high above the road, a hundred meters away from the entrance to the monastery. It is partly hewed in massive solid rock; its composition was, in all probability, largely influenced by the shape of the cave which existed there.

Khachkars with various ornaments are inserted into the exterior walls and hewn on the adjacent rock surfaces.