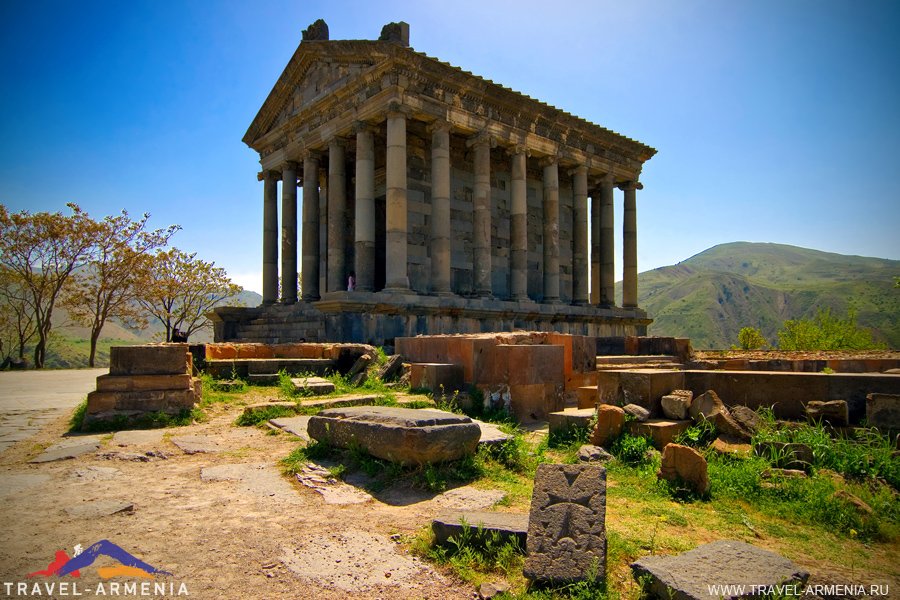 Garni is a temple complex located in the Kotayk Province of Armenia, situated approximately 30 km southeast from Yerevan.

The first traces of human occupation date back to the 3rd millennium BC and are concentrated in an easily defensible terrain at one of the bends of the Azat river. In the 8th century BC the area was conquered by the Urartian king Argishti I. The first literary testimony to the existence of a fortress on the spur crowning the site of Garni comes from the Roman historian Tacitus and dates from the middle of the 1st century AD.

The fortress of Garni (Gorneas in Latin) became the last refuge of king Mithridates of Armenia, where he and his family were assassinated by his son in law and nephew Rhadamistus. Several constructions and buildings have been identified within the enclosed area, including a two-storey royal summer palace, a bath complex, a church built in AD 897, a cemetery  and the site’s most famous and best preserved edifice, a peristyle Greco-roman temple built in the Ionic order.

Of particular interest is the bathhouse located in the northern part of the site. It as a well preserved hypocaust and one of its floors is decorated with a mosaic reproducing a well known late Hellenistic iconographic type. The peristyle temple is situated at the edge of the existing cliff. It was excavated in 1909-1910 but the full publication of its architecture appeared only in 1933.

It has been surmised that it was constructed in the 1st century AD by the King Tiridates I of Armenia, probably funded with money the king received from emperor Nero during his visit to Rome. The actual building is a peripteros temple resting on an elevated podium and was most likely dedicated to the god Mithras. The entablature is supported by 24 Ionic columns resting on Attic bases.

Unlike other Greco-Roman temples, it is made of basalt. In 1679 it was destroyed by an earthquake. Most of the original architectural members and building blocks remained at the site until the 20th century, allowing the building to be reconstructed between 1969 and 1975. After the adoption of Christianity some churches and a katholikos’ palace were also constructed at the fortification site, but these are now in ruins like most of the other buildings except the temple.