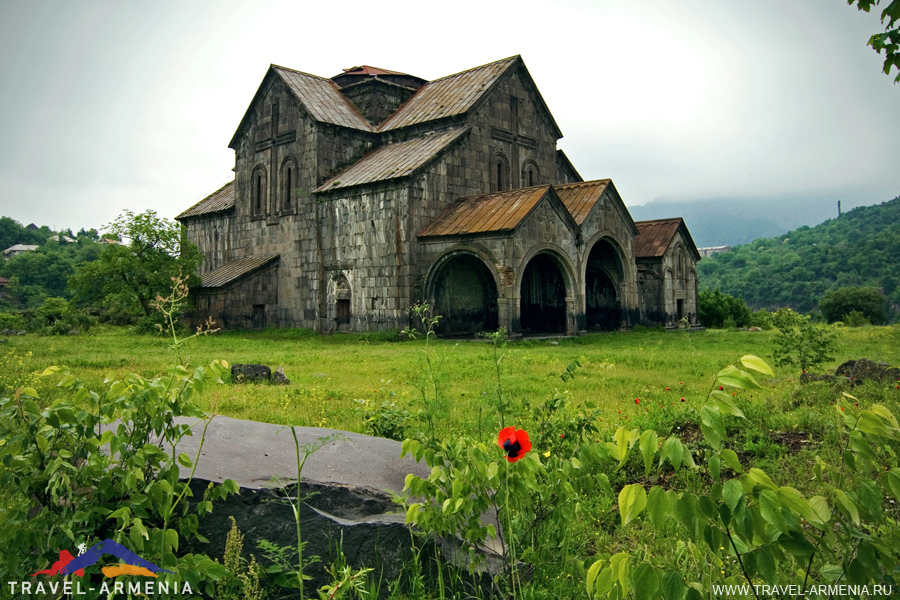 Akhtala  a town in Lori Province, Armenia with 2800 inhabitants according to 2009 estimate. It is situated on the left bank of Debed river at a distance of 186 km north of Yerevan and 62 km north of provincial centre Vanadzor on the slopes of Lalvar mountain. Akhtala was a village until 1939 when it was granted the status of urban community. In 1995 the government of independent Armenia reaffirmed the status of Akhtala as a city.
Above Sanahin and Haghpat lies the lesser known but very worthwhile fortified monastery of Akhtala, with breathtaking frescoes. (the key is with a villager, don’t leave without seeing the interior)
The Akhtala fortress with its temple complex is situated in Akhtala village of Tumanyan region in a high valley. The fortress’ territory is surrounded with rocky deep canyons from three sides, and the north side joins the plain. Besides the natural advantages, the fortress was protected by tall pyramid gates mutually connected with the picturesque environs which are preserved to this day. The main entrance opens from northern side, which has a roomy hall with vaulted roof and a three-storied pyramid tower. The fortress was built in the X c by the Bagratuni dynasty’s Kyurikid branch.
Being one of the outstanding defensive spots of medieval Armenia, it together with Lori, Kayan, Kaytzon, Gag and other fortresses, played a great role in protecting the northwestern regions and the main road taking from Armenia to Georgia (through Gugark)․
The XIII c historians Kirakos Gandzaketsi and Vardan Areveltsi mention the fortress as Pghndzavank. As the above historians inform us the temple’s main church- Holy Virgin was built in the XIII c by long-armed Ivane Zakaryan, turning the Armenian foundation into Chalcedonian. The church is situated in the middle of the fortress’ territory along the longitudinal axis. It belongs to the domed basilica type of churches, where the bearings join with the side-chapels of the apse. Two pairs of arches divided the longitudinal stretched prayer hall into three naves, the central one of which (with double side-chapels) on the eastern side ends with low staged, half-rounded apse and the side-chapels end with sacristies. 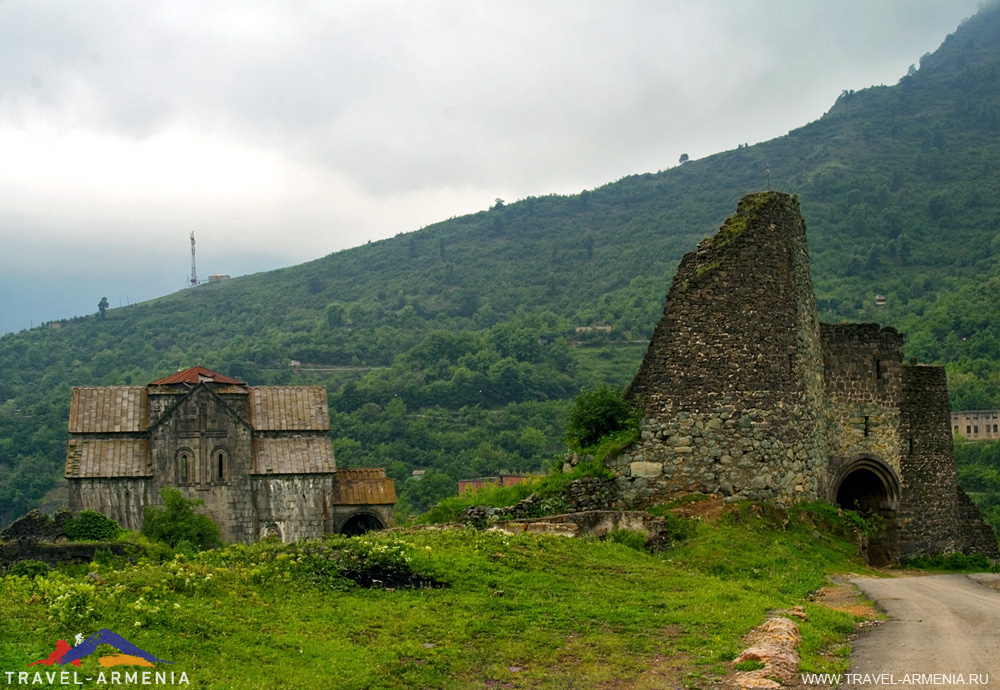 Signs of chalcedonian (Georgian) constructions remain in the structure of the scheme and in architectural decorations that have a Georgian style. This is evidenced by the vaulted vestibules on the eastern side, the relief crosses over the edges, the alcoves bordered with pillars and their scalloped bays, as well as the lavishly used decorative motives.he Holy Virgin’s church is famous for its first-rate and highly artistic frescos, with which are covered the inside walls, the partitions, and the bearings. They are characterized with perfect iconography, richness of theme and variety of different colors (where blue rules). Especially outstanding are the Virgin on a throne, the sacred communion, Hovanes Karapet frescoes, as well as pictures of saints till the waist or standing in whole length, on the pillars and the bearings.
In the territory of the temple on the northwestern side there is a one-nave vaulted church and its half-rounded apse going out from the eastern wall’s borders. The only entrance is from western side, surrounded with a trench. There used to be a vestibule with a gable roof, which has not survived.
Parallel to the north of the Holy Virgin’s church the two-storied building of the temple friary stood, whose walls are preserved. It was a roomy hall with wooden roof, for which the exterior fortress wall served also as its eastern wall. The northern wall is half-rounded, and an entrance to the underground tunnel opens here. Beyond the territory of the temple in Akhtala village, there are many churches, chapels, and defensive erections standing or destroyed (X-XIII cc). Here belong the temple of the Holy Trinity (consisting of two connected churches, a chapel, ou tside hall, and underground constructions), St. George church, the pair of churches in the western part of the temple the chapel of Barsegh, etc., which in their turn evidence Pshndzahank-Akhtala’s medieval eventful (rich) past. 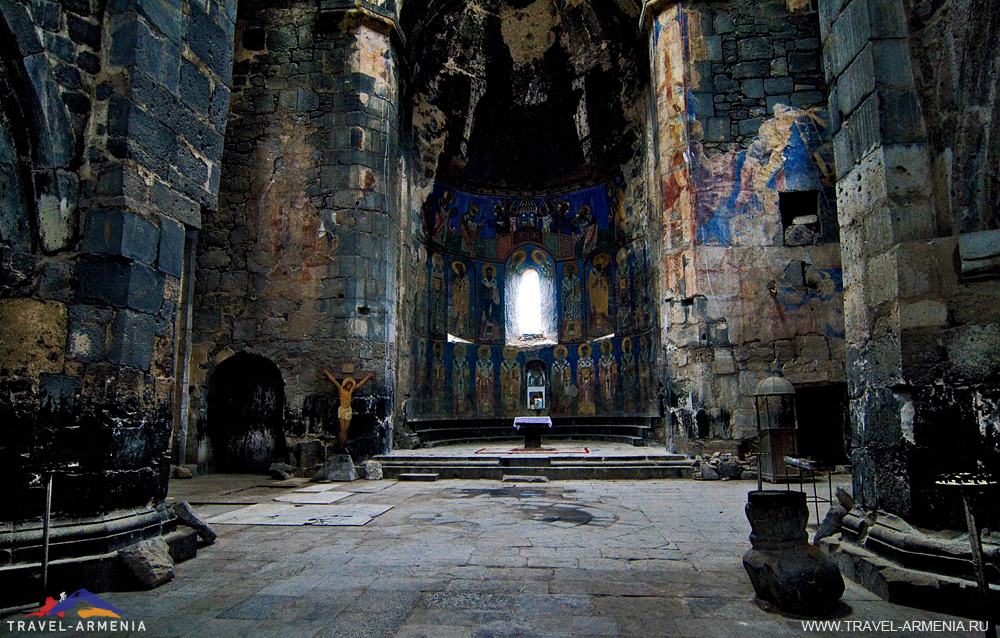 The main entrance and the pillars were repaired; the ramshackle wooden belfry built in XIV was taken away from the yard. In 1975-1978 the top parts of the walls on the church were repaired, the tin of the roof was replaced with basalt slabs.
(Heading north past Haghpat towards Noyemberian) Crossing the Debed on an unsignposted bridge to an industrial appendage of Akhtala, heading N (right just past the bridge), then bearing W (the road turns left and you should follow it with the gorge to your left until you spot the monastery on across the gorge on your left), you reach the 13th c. monastery* at Akhtala (2002 v.), with an Arakelots or S. Gevorg church inside the 10th c fortress and two more W of it. Also, a 13th c. spring monument.